Frank Buckles, Last World War I Doughboy, Is Dead At 110 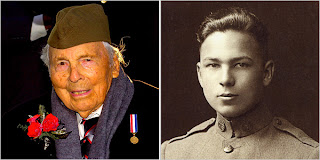 From the New York Times;


Frank Buckles, who drove an Army ambulance in France in 1918 and came to symbolize a generation of embattled young Americans as the last of the World War I doughboys, died Sunday at his home in Charles Town, W. Va. He was 110.

Frank Buckles was not just a veteran of "The Great War",he was also a POW in WWII;


...........he was on business in Manila when the Japanese occupied it following the attack on Pearl Harbor in December 1941. He was imprisoned by the Japanese, losing more than 50 pounds, before being liberated by an American airborne unit in February 1945.