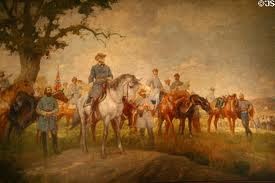 On this day 150 years ago,after the battle of Fair Oaks where then commanding General Joeseph E. Johnston was grievously wounded,President Jefferson Davis placed in command of the Army of Northern Virgina,Robert E. Lee.No other decision would Davis make have a bigger impact on the war.

The objectives Lee incorporated for the army were these.

3.) Invade the North.Thereby relieving Virgina,garnering much needed supplies,and bringing the war home to the North.

4.) At some point destroy the Army of the Potomac.

Lee succeeded in the first 3 objectives and coming close twice to accomplishing the 4th.

Due to limited resources and a small population from which to draw troop strength from,Lee understood -where many at that time didn't- that he had a very narrow window in which to try to win the war.For a little over a year the ANV dominated the Army of the Potomac,until it made its crest at Gettysburg.

Afterwards,with an severe lack of resources and ranks he could not fill,Lee changed his strategy.He sought to bludgeon the Army of the Potomac,attempting to destroy the North's will to fight.By using earthworks he maximized his troops against impossible odds,2 to 1,3 to 1,eventually 6-1He extended the war far longer than it should have lasted.

Robert E. Lee was this country's greatest general and probably,next to George Washington and Thomas Jefferson,the greatest man this country ever produced,IMHO.
Posted by Thomas Gann at 12:00 AM

Email ThisBlogThis!Share to TwitterShare to FacebookShare to Pinterest
Labels: Army of Northern Virgina, Robert E. Lee, War Between the States