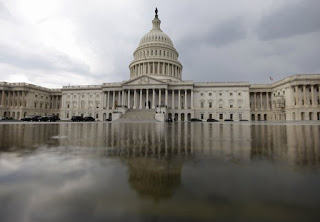 The boat is sinking.We have and are taking on too much debt.We should be bailing water-cutting the budget- but are leaders in Washington are debating on how much to enlarge the hole in the bottom of the boat to take on more debt,because only in Washington Bizzarro World is the solution for existing debt is to add on more debt on top of that debt.

From The Market Ticker;