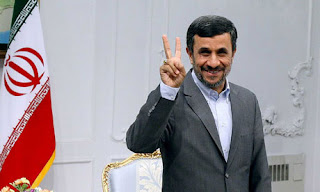 John Bolton understands that we must do whatever it takes,at all costs,to prevent a nuclear armed Iran:


In fact, by focusing so intensively on just the assassination plot, Obama is ignoring the overwhelming broader implications. Iran's scheme is far more important for what it reveals about the nature and character of Tehran's rulers than the particulars of one gambit, however abhorrent. A terrorist-sponsoring regime capable of putting the occasional ambassador in mortal peril is sufficiently rabid that its likely acquisition of nuclear weapons in the very near future will magnify its threat to truly existential proportions, at least for small countries nearby. And it is the nuclear weapons that should truly concentrate our attention, since they will put us all in mortal peril.
We must abandon the mirages, to which Obama still clings, that Iran might negotiate an acceptable "solution" to its nuclear weapons program, or merely that economic sanctions will somehow force Iran to negotiate. No wonder the Iranian regime mocks us for weakness and willful blindness. Even a threatened attack on our soil, which could have killed hundreds of Americans, has not been enough to spur Obama into decisive action.
The unpleasant reality is that the only alternative to a nuclear Iran is to break Tehran's program through the targeted use of military force, either by Israel, the United States or both. This is, to be sure, a risky, unpleasant and unattractive option. It is, nonetheless, far preferable to the only existing – and rapidly approaching – alternative, which is Iran with nuclear weapons. Although unwilling to say so publicly, Saudi Arabia and other Arab states have long privately hoped for leveling Iran's nuclear program. With the Iranian assassination plot now public, they might even smile publicly.