What Is Barack Obama Really Trying to Hide About His Past? 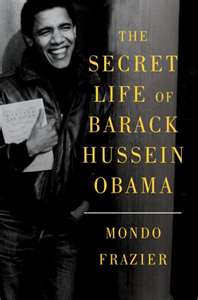 From In From the Cold:


But there's a larger issue at work here.  What type of individual lies about his background (or lets others do it for him) for the better part of two decades?  Writing at National Review, Mark Steyn likens Obama to Jay Gatsby, the F. Scott Fitzgerald character who invented a past that was most pleasing and convenient for him.  Steyn compares the aloof Obama to Fitzgerald's character, totally aloof as the social and political whirl spins about them.  In Steyn's words, "the more autobiographies [Mr. Obama writes] the less we know about him.  And obviously, what we do know about him has been carefully tested and contrived.

While we like the Gatsby analogy for Mr. Obama, we think there's one that is even more appropriate.  In some respects, Obama's vague (but storybook) past reminds us of Don Draper on AMC's Mad Men. Anyone remotely familiar with the series knows that Draper, the creative director of two major advertising agencies, has long held a dark secret.  He was born Dick Whitman, the illegitimate son of a prostitute who lived in poverty as a child and was abused by his stepfather.

After dropping out of high school, Whitman winds up in the Army during the Korean War, serving under a lieutenant named Don Draper.  When the real Draper is killed in a gasoline fire (and his body is burned beyond recognition), Whitman takes his dog tags and becomes the lieutenant, figuring it may give him a chance for a better life.  His deception goes unnoticed until one of Draper's agency rivals, Pete Campbell, learns his secret and reveals the news to the firm's senior partner, Bert Cooper, who shrugs it off. "Who cares?" he tells Campbell.

What exactly is Obama trying to hide?Is it simply that he is Kenyan born rather than Hawaiian or is there more?Could it be that there is something more darker and sinister lurking in his past than any of us could possibly imagine,or is it just something that is so embarrassing his insecure,fragile ego couldn't handle it?

We know Barack Obama doesn't cultivate personal relationships.He has no friends that we know of,certainly none he grew up with or knew while in school.He has no family that he assiocates with outside of his wife and 2 girls.The only types of relationships he seems to have formed are those of a political nature or that is beneficial to him in some way or another.Outside of Michelle,their is no one remotely close to him or knows anymore about him than the general public.

His past remains a fog.Obama released a birth certificate last year but questions still abound.According to Obama he lived in Hawaii til age 6,then he lived in Inodensia til 10,then he returned to Hawaii to attend the Punahou School,but no one remembers him.Obama still refuses to release his records from Harvard and Columbia university and again no one who attended those schools at that time remembers him.The only thing we know about 'Barry' outside of the approved biography is that he might of been dealing drugs in Harlem while attending Columbia,outside of that he is forgotten.

Their is something hidden in that fog,something more than just where Barack Obama was born and thats what I want to know.
Posted by Thomas Gann at 2:38 PM

Re: "Obama still refuses to release his records from Harvard and Columbia university..."

Surely there must be something hidden for Romney not to release his college records.

McCain and Bush did reveal their college records,as for Romney I don't know.

Here's one thing,we know Romney participated in a prank to shave a classmates head when in prep school.Thats far more than we know about Obama from the 5th grade til his graduation from college.

Re: "McCain and Bush did reveal their college records,as for Romney I don't know."

No neither did. McCain simply said that he was one of the lowest in his class. He did not show the actual grades. Bush's was shown, but not by Bush. It was leaked by a source at Yale.

Clinton did not show his grades, or Bush41, or Reagan. We have had two presidents who were members of Phi Beta Kappa--Teddy Roosevelt and Woodrow Wilson--and neither showed their grades.

Romney has not shown his grades--though I'm sure that they were just fine. Nor did Bachmann, Gingrich, Santorum or any of the other original Republican candidates.

In fact it is NORMAL for presidents and presidential candidate not to show their full grade transcripts---though a few have shown grade-point averages.

Re: "Here's one thing,we know Romney participated in a prank to shave a classmates head when in prep school." And apparently Obama told his classmates a lie when he said that his father was "an African prince." Neither of them chopped down cherry trees or threw dollars across the Potomic River.

Thank you for your comment,Anonymous.

Yes McCain and Bush did reveal their college records,but thats not the point.The point is before Obama reaches Harvard nobody knows him,nobody remembers him,either in Hawaii or at Columbia university,he just comes out of nowhere.