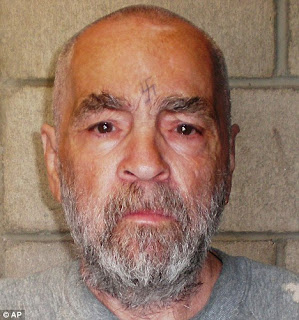 Move over Al Gore,their is a new champion to fight against the scourge of global warming,Charles Manson.Yes,Charles Manson is bringing his unique brand of visionary leadership in the crusade to save to save planet Earth from destruction.Here is what Green Charles had to say in the Daily Mail;


Crazed cult leader Charles Manson has broken a 20-year silence in a prison interview coinciding with the 40th anniversary of his conviction for the gruesome Sharon Tate murders - to speak out about global warming.
The infamous killer, who started championing environmental causes from behind bars, bemoaned the 'bad things' being done to environment in a rambling phone interview from his Californian jail cell.
'Everyone’s God and if we don’t wake up to that there’s going to be no weather because our polar caps are melting because we’re doing bad things to the atmosphere.
'If we don’t change that as rapidly as I’m speaking to you now, if we don’t put the green back on the planet and put the trees back that we’ve butchered, if we don’t go to war against the problem...' he added, trailing off.


He is a founder of ATWA (which both stands for Air Trees Water Animals and All The Way Alive). It's typically manic mission statement warns of the destruction of the planet from pollution.

WTF!Why is this man allowed to found his own non-profit organization?Furthermore,why is this convicted murderer allowed to profit off his perverted paintings and music also?

Charles Manson should have been executed years ago,but California is to "civilized" to do the right thing.Since California won't introduce Mr.Manson to his maker,then he should receive nothing less than the "Cool Hand Luke" treatment.Charlie boy should spend his days digging a hole,then refilling that hole,and digging out that same hole over and over again,because obviously he has to much free time on his hands.
Posted by Thomas Gann at 1:18 PM