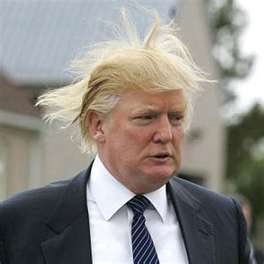 Thomas Sowell has a brilliant column posted at NRO on Donald Trump's potential candidacy for president;


Donald Trump as a candidate for the Republican nomination would use his superior articulation skills — not to mention brash irresponsibility — to trash all the other Republican candidates for that nomination, leaving them damaged goods in the eyes of the public, and therefore less able to gather the votes needed to prevent the reelection of Obama.

For weeks now I have been trying to get my head around why would The Donald  run for president and run as a Republican to boot.He is certainly no conservative.In 2008 he says he voted for Obama.He is a supporter of the Clinton's.He profits from a big and intrusive government.Unless he is running to pump up his already over sized ego,why on Earth would this man run for POTUS?

Their may be a reason and Mr.Sowell alludes to it,a nefarious reason.Donald Trump is a plant.He is a political double agent sent to wreck havoc in the Republican primary field and potentially do damage and weaken the future nominee of the party,to ensure Obama's reelection.

I may be way off base,but that is the only reason that makes sense to The Donald's candidacy
Posted by Thomas Gann at 11:37 AM