Just Exactly Who Is Crazy?! 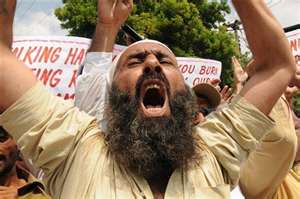 A pastor in Florida burns a Koran and in Afghanistan Muslim's go on the rampage killing 12 U.N. workers.The weak-kneed politicians here blame the pastor for burning the Koran,not the weak minded Muslim's who rioted and murdered because they were told to by some mullah.No it was some pastor in Florida,who nobody knows,fault,not the mullahs who egged on the crowd in Afghanistan.Just where are those moderate Muslims we hear so much about.

You know we should be thankful nobody has photographed a crucifix in urine,because you never know what those crazy Christians might do.Oh,that's right,someone has already done that,and Christian did not only not riot in the streets,but the guy received federal funding for his"art."Go figure.

Jesus said "you shall know them by their fruits",and Islam's fruit is evil.Around the world Islam produces nothing more than rage and hatred.Mercy and forgiveness are not to be found in it.Islam is supposed to be a religion of peace but all we ever see is violence from it.

Update: This from Mark Steyn at The Corner;

The reason we’re losing this thing is because of a lack of cultural confidence, of which the fetal cringe of this worthless husk out-parodies anything Coward could have concocted. When I’m speaking on this subject, I often get asked to reprise the words I quote in my book, from Gen. Sir Charles Napier in India explaining to the locals his position on suttee — the tradition of burning widows on the funeral pyres of their husbands. General Napier was impeccably multicultural:

You say that it is your custom to burn widows. Very well. We also have a custom: when men burn a woman alive, we tie a rope around their necks and we hang them. Build your funeral pyre; beside it, my carpenters will build a gallows.You may follow your custom. And then we will follow ours.

In the absence of cultural confidence overseas, we are expending blood and treasure building an Afghanistan fit only for pederasts, tribal heroin cartels, and the blood-soaked savages of Mazar e-Sharif. In the absence of cultural confidence at home, we are sending the message that the bedrock principles of free, pluralist societies will bend and crumble in a vain race to keep up with the ever touchier sensitivities of the perpetually aggrieved. Claire Berlinski has it right: The real “racists” here are not this no-name pastor and his minimal flock but Reid, Graham, and the Times — for they assume that a significant proportion of Muslims are not responsible human beings but animals no more capable of rational behavior than the tiger who mauled Siegfried’s Roy. If that is true, certain consequences follow therefrom. The abandonment of the First Amendment is not one of them.