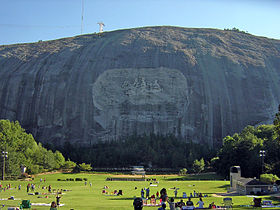 
"It's almost like a black eye or an embarrassing smudge on our culture," McCartney Forde told 11Alive News on Monday.
That's how Forde feels about the 2 football field-wide carving of Confederate President Jefferson Davis and Generals Robert E. Lee and "Stonewall" Jackson that towers 400 feet above the mountain's base.

When the Taliban in Afghanistan destroyed the Bamiyan Buddhas it was described as 'cultural terrorism'.This is nothing more than the same thing than what the Taliban did.Its an attempt to purge,mine and others,Southern Heritage from off the face of the Earth,all to conform to the Political Correct narrative that the progressives have foisted upon us.The real haters are on the left.