The 2 Sides Of Georgia Secedeing From The Union 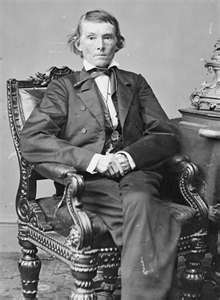 This article,from the Dalton Daily Citizen tittled, Civil War anniversary: Georgia secedes from the union, I thought brought forward some very good information on Georgia's secession from the union.

The first point being that they were 2 "camps" in the secession movement in Georgia.One,pro-secession, favouring immediate secession.While the other faction,known as the,cooperationist,favoured a more wait and see approach,preferring to wait until after Lincoln's inauguration to contemplate whether their was a need for secession or not.

Alexander Stephens,the future Vice President of the Confederacy,was one among many who held the cooperationist view.Stephens asked the General Assembly to wait, saying: “In my judgment, the election of no man, constitutionally chosen to that high office, is sufficient cause for any State to separate from the Union.” Not everyone was a "fire eater."