The media was full of stories this past week,commemorating the 50th anniversary of the inauguration of John F. Kennedy as the 35th President of the United States on Jan 20 1961.While the media was awash in nostalgia of the revision of history,they call"Camelot,"I began to notice a tremendous difference between the ideal's of the present Democratic party to those expressed by JFK,a quarter of a century ago.
In Kennedy's inaugural address he made this declaration;"...the belief that the rights of man come not from the generosity of the state, but from the hand of God."
The Democratic party  firmly believes the opposite today.They have no concept of Natural Rights,failing to understand that man's natural disposition is to be free.They believe that even our daily lives should be regulated to every last detail.Telling us what we should eat,where we should live,what mode of transportation we should use,even what kind of light bulbs we should use to light our homes.They view the people as ward's of the state,not,as it should be,the government as a ward of the people.
The most famous line from the inaugural address was this;"Ask not what your country can do for you - ask what you can do for your country"
This runs counter to all the various groups who comprise the Democratic parties base of support.They are a collection of grievance mongers,seeking to receive from the federal government what they believe they are entitled to because of their gender,race,creed,or sexual orientation,in the name of equality.They do or produce nothing to improve their station in life or that of their community,but rather seek the government to rectify the wrongs they believe have been perpetrated against them.
JFK also avows this in his speech;"Let us never negotiate out of fear. But let us never fear to negotiate."
And this;"For only when our arms are sufficient beyond doubt can we be certain beyond doubt that they will never be employed."
In these 2 quotes Kennedy affirms the doctrine of peace through strength.The Democratic party today seeks peace through appeasement,which is peace through weakness.They refuse to learn the lesson's of history,that tyrants care not one red cent for our good intentions ,but for our ability to defend ourselves against their tyrannical desires.If you project weakness,you shall surely be attacked.If you project strength you will produce peace and be secure. 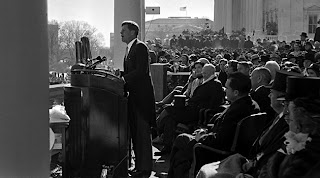 Though the Democratic party invokes the name and memory of John F. Kennedy,his spirit is far removed from what they are today.
Posted by Thomas Gann at 2:55 PM