I don't know who said this,but I believe it to be true,"you can judge a nation's greatness by the heroes they choose to honor."When a nation memorializes a person in stone or some other work of art,they are saying"this man or woman best exemplifies who and what we are."Thats why you wont find statues to Adolf Hitler in Germany.Thats why so many nations belonging to the Warsaw pact at the end of the Cold War pulled down the statues and edifices of Lennon and Stalin,they no longer represented who and what they are.
In Washington D.C.,we have chosen to honor many men and women,most prominetly,Thomas Jefferson,Abraham Lincoln,and the father of our country,George Washington,very soon we will add a statue to,Dr. Martin Luther King Jr.By honoring these people we are saying to ourselves,our posterity,and the world in which we live,"that these individuals best represent who and what we are."

Now this fromFree North Carolina;The annual MLK observance at the state house in Columbia SC had an interesting twist this year. The event is held on the north side steps of the statehouse. Prominent at that location is a large bronze statue of George Washington. This year, the NAACP constructed a "box" to conceal the Father of His Country from view so that participants would not be offended by his presence.
Via Billy 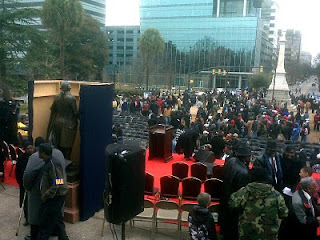 I also equally believe that a nation's or a group's greatness can be judged by the heroes they choose to dishonor,those they choose to remove from their sight and hide in a "box."The NAACP through this action has told us who and what they are.They have told us,like most liberals,they discount most of our history pre New Deal and the Counter Culture of the 1960's.They have chosen to,unlike Dr.King,to judge people by the color of their skin,rather than the content of their character. They have chosen to segregate themselves from the rest of America and our history.
Posted by Thomas Gann at 2:17 PM