He's Not A Muslim,He's A Golfer! 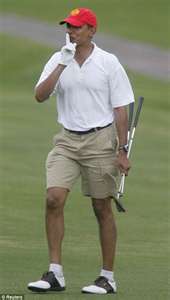 I think Jonah Goldberg sums up Obama about right;

The real problem for Obama is not that he likes his exercise. It’s that he’s acting like an employee who thinks he’s too good for the job.

During the 2008 campaign when,Obama,criticized,then President Bush,for "taking his eye off the ball",I thought he was referring to the war in Afghanistan.Now we know Obama was just referring to Bush's golf swing.
Posted by Thomas Gann at 11:15 AM