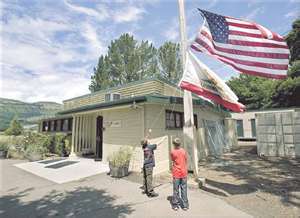 
This might seem like a stupid question, but before you vote, consider that wise educrats have their reasons for wanting to ban Old Glory. Prominent among them is that Reconquistadors don't like it, having already progressed from doing the work Americans won't do to despising the flag Americans don't despise. Failure to pander to the politically privileged could compromise safety, or so we're told.

When flying your country's flag in your own country becomes offensive,you have a problem.
Posted by Thomas Gann at 4:18 PM