We Are All Americans 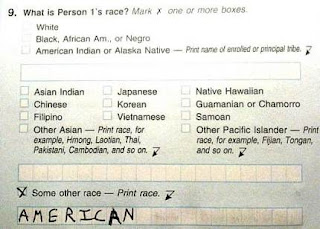 
My fellow Americans, who are “your people”? I ask because U.S. Attorney General Eric Holder, who is black, used the phrase “my people” in congressional testimony this week. It was an unmistakably color-coded and exclusionary reference intended to deflect criticism of the Obama Justice Department’s selective enforcement policies.


Katrina Pierson is my people. She’s a feisty young Texas mom and Dallas tea party activist who supports limited government principles and rejects left-wing identity politics. She confronted the NAACP last year with a rousing manifesto of political independence and rebutted the left-wing group’s attacks on the tea party as racist:
“The reality is that we colored people no longer require the assistance from other Negros for advancement,” Pierson said. “These groups run to the rescue of distressed brown people only when the media deems it newsworthy. Meanwhile, there are inner city black children who continue to grow up fatherless while sharing a neighborhood with stray bullets, drugs and a plethora of liquor stores on every corner. … I don’t believe that the true meaning of this nation’s creed was to move black people from one form of slavery to another.”
The NAACP, she observed, is made up of “Democrats who bow to a Democrat master today as they once did over 200 years ago. Once this is realized by the forgotten society, race in this country will be as irrelevant as those who thrive off of it.” Amen, sister.

Here is her response to Obama's claim that the Tea Party is racist;


According to U.S. News and World Report’s Kenneth Walsh, President Obama told guests at a private White House dinner that he believed the tea party movement had a “subterranean agenda” of racism against him. But Lt. Col. West summed up the movement’s transcendent, post-racial agenda forthrightly:
“The tea party is a constitutional, conservative grassroots movement — and that’s it. The tea party stands for three things: They want to see effective, efficient constitutional government, they stand for national security, and they stand for free market, free enterprise solutions. That’s it.“
It’s government of, by and for the people — all the people. Not just the ones still shackled by reflexive Democratic Party loyalty. We are beholden not to our skin pigment or ethnic tribes, but to American ideals, tradition, history and faith in the individual.

Today the Democratic party,the radical left,chooses to define themselves by the hyphen that denotes their race,creed or gender.They define themselves by what divides us rather than on what unites us.Instead of,"We the people",it has become,"my people."
Posted by Thomas Gann at 11:36 PM

With any luck, he should be going as a result of Gunwalker.