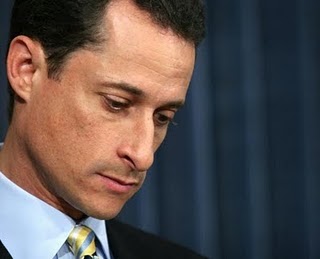 From TL In Exile;


The trouble is that lesser men have taken the reins of a great nation and have come to believe that simply because they carry the same title as George Washington, that they also possess the same wisdom, the same temperament, the same qualities as did he. They do not.

Some believe that since they have the ability to make laws as did Jefferson, Madison and Adams that they somehow have an understanding of what makes a society a success. It is the same as a little-leaguer smacking a home run in a small field and comparing himself with Hank Aaron. Yet, the little-leaguer is also a batter who has hit a home run, perhaps even younger than did Hammerin' Hank. The comparison, however, is silly, though through a child's eyes it might not seem ridiculous at all.

Anthony Weiner comes to mind when I think of these lesser men who now roam the halls of our congress, who pass laws for us to abide, who stand between us and the liberty we deserve. Have no doubt, they are the ones who in their limited vision have resorted merely to deprivation of liberty to solve every ill. The founders were greater men, men who understood that liberty must be preserved and that it is the duty of the legislator to achieve liberty while still providing protections of liberty among the populace.

The problem is that we have become a society of lesser men and our elected representatives only reflect the degraded culture we have become.Hopefully we will return to the God of our Founding Fathers and their ideas and principals that have truly made us great and the envy of the whole world.
Posted by Thomas Gann at 10:37 AM