Matt Dillon Has Passed Away 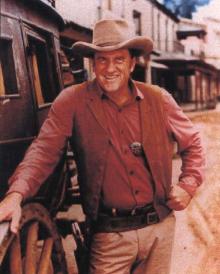 He served his country in the army during WWII at Anzio He was wounded in his right leg and received the Purple Heart. He is best known for his role of Marshal Matt Dillon in the TV series Gunsmoke. Gunsmoke ran from 1955-1975 and is still on the air today being discovered by many old and new fans alike.

Over the 20 years of Gunsmoke he worked with 100’s of actors, some of them just starting out like Harrison Ford, Burt Reynolds, Charles Bronson, and Betty Davis.

His acting debut was in a movie called The Farmer’s Daughter opposite Loretta Young. He worked for the John Wayne’s film production company Batjac and made movies with John Wayne including Islands in the Sky, Hondo, The Sea Chase and Big Jim McLain.

The Thing which aired in 1951 is a sci-fi classic and Jim’s 6’7” height made the creature more believable.

He acted in many movies before he started Gunsmoke. Later he went on to do the mini series How the West Was Won and McLain’s Law.

Jim will be deeply missed by his family and friends. In lieu of flowers the family asks that donation be made to United Cerebral Palsy in Jim’s name.

Jim is survived by his wife Janet, 2 sons and six Grandkids. The services will be private for family only.

For my father,when it came to cowboys,their was John Wayne and Matt Dillon and all the rest.In fact if push came to shove he would have chosen Matt Dillon over The Duke,in a very close vote.

My father loved westerns and he especially loved Gunsmoke.When I was little you kept quiet when the news came on or a documentary about WWII came on and especially when Gunsmoke came on,whether it was a brand new episode or a rerun he had seen a thousand times before,you kept quiet.In his last years of life he would get up at 5A.M. just to watch it,he loved it so much.If Gunsmoke had a number 1 fan he was it.

God bless you James Arness and thank you for the wonderful hours of enjoyment you gave my father as Matt Dillon.
Posted by Thomas Gann at 11:22 PM