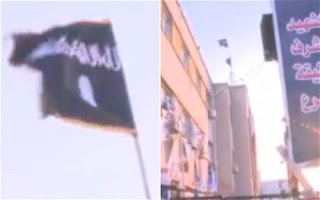 This is what Obama's victory in Libya looks like:

The flag, complete with Arabic script reading "there is no God but Allah" and full moon underneath, was seen flying above the Benghazi courthouse building, considered to be the seat of the revolution, according to the news website Vice.com.
The flag was said to be flying over the building alongside the Libyan national flag but the National Transitional Council has denied that it was responsible.
Vice.com also reported that Islamists had been seen driving around the city's streets, waving the Al Qaeda flag from their cars and shouting "Islamiya, Islamiya! No East, nor West".
The revelation came just days after it emerged that rebels in Libya have imposed Sharia law in the some parts of country since seizing power.
Mustafa Abdul-Jalil, chairman of the National Transitional Council, said Islamic Sharia law would be the "basic source" of legislation in free Libya.

I think in the coming years we will long for the days of "Wacky Gadafi",versus these new guys in the "New Libya."
Posted by Thomas Gann at 12:18 PM