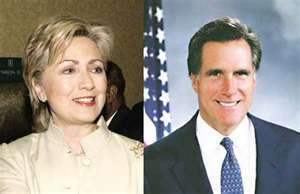 
“The Romney campaign wishes it had as much of an air of inevitability as Hillary did four years ago,” GOP strategist Keith Appell told The Hill. “The healthcare issue is a symptom of a greater concern: He has been on so many sides of so many issues so recently — and it’s all available on video.”
Even those less overtly critical of Romney than Appell find the Clinton example instructive.
“Voters are so skeptical of all things political these days that they put a huge premium on authenticity,” said Republican strategist Mark McKinnon. “Hillary Clinton had an authenticity problem and so does Mitt Romney.”

I would also compare Mr. Romney to Barack Obama.Their is unwillingness by the MSM to vet and question Mitt Romney on his many flip flops,the same way they ignored Obama's past ties to socialists and radicals,like Bill Ayers.

But rest assured,come the General Election next year,the MSM will take off their kid gloves and turn on good ole Mitt,the same way they did their darling John McCain in 2008.
Posted by Thomas Gann at 12:00 PM