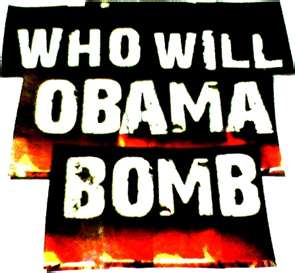 
If we get to the scary point of Iran’s going nuclear in 2012, expect the Obama administration — up for reelection and without much of a domestic record to run on in these hard times — to consider a preemptive strike. Be assured that if it does, there will be no outrage in the Democrat-controlled Senate, no campuses on fire, no ad hominem Moveon.org ads in the New York Times — all the sorts of anti-war hysteria that once sought to turn a moderate like George W. Bush into a caricature of some trigger-happy yokel from shoot-’em-up Texas.

Obama is desperate and will do anything to get reelected.Sometime between now and election day next year Obama will bomb Iran to boost his sagging approval numbers.
Posted by Thomas Gann at 11:43 PM