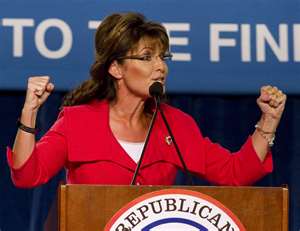 
At a Republican meeting not far from here, Sarah Palin nailed the difference between the Tea Party and the Occupy Whatever crowds. While we all may agree that the bailouts were wrong, and we should end the fed, as some occupiers seem to protest, my answer is make the government so small and impotent they can't give bailouts. OWS says "give me the money instead of them".

"They say 'Wall Street fat cats got a bailout so now I want one too.' And the correct answer is no one is entitled to a bailout," Palin told the crowd of about 1,000 at the Republican Party of Florida dinner. "The American dream, our foundation, is about work ethic and empowerment, not entitlement."


She compared the protesters and President Barack Obama to the "crony capitalists" they say they oppose.


"Barack Obama is owned by Wall Street [see here - Graybeard]. The fat cats, as he calls them, they're his friends. They're his pals. That's where he gets his campaign donations. And he's very generous about giving these cats their cat nip — bigger returns on their investments in bailouts," Palin said.


She went on to try and convince OWS that they need to be protesting Washington, where the policies they claim to oppose come from. Fat chance.

She is spot on as usual.It would have been nice if candidate Sarah Palin had made those remarks,but alas it was not to be.