Open Mike At The G20 Summit 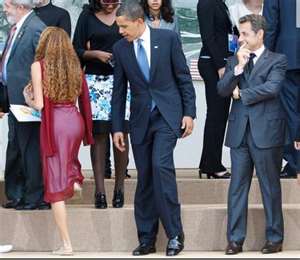 What I find disturbing about this,is not that President Obama and the French president,Sarkozy,were found to be gossiping like 2 teenage girls at the school dance,about the girl in school they don't like.That's par for the course for Obama.He is a petty and small minded individual,who is threatened by anyone who may challenge him.

What I find disturbing is this:


A member of the media confirmed Monday that "there were discussions between journalists and they agreed not to publish the comments due to the sensitivity of the issue."


He added that while it was annoying to have to refrain from publishing the information, the journalists are subject to precise rules of conduct.

A free press is essential to a free society.While a non-partisan media is a myth,a press that functions independently of the government is a must.