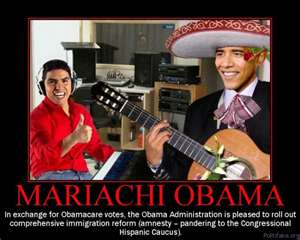 Obama cancelled deportation for 300,000 illegals yesterday,"the move won immediate praise from Hispanic activist."BTW,he broke the law in this and should be impeached for it,but that's nothing new.

You may ask yourself why would Obama want to keep any illegals in this country,when millions of legal Americans are out of work and cannot find a job and that would be a very good question?Well CNSNEWS explains why:


Only 49 percent of Hispanic Americans said last week they approve of the job Barack Obama is doing as president, according to the Gallup poll. That is down 36 points from the high of 85 percent that Obama’s approval hit among Hispanics in the Gallup poll in the spring of 2009, his first year as president.

Obama knows he's got no where to go to get new votes with HIS economy,so his only path to victory in November,2012 is to hold on to and retain as much of his vote from 2008 as possible through out right government bribes,like refusing to deport illegals,and to savagely attack his opponent to the point not even their own mothers would vote for them.This coming election is not only going to be nasty but extremely expensive for the taxpayers.