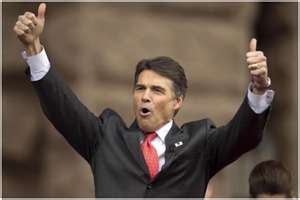 Over at Hot Air they are showing a poll done by Zogby which shows Rick Perry leading the GOP field by 41% to his nearest competitor Mitt Romney 12%.While I don't believe the exact numbers in this Zogby poll,the fact is undeniable,Rick Perry has taken over this campaign and the interest and excitement of his campaign dwarfs the others by far.

This is bad news if your a Sarah Palin supporter.Sarah needs to jump in the race now,before Perry has time to consolidate his support behind him,or I'm afraid it will be to late,if its not already to late.