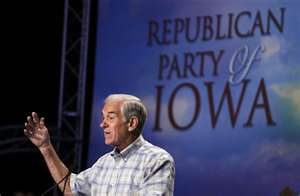 The GOP establishment is in an uproar at the potential of a Ron Paul victory in the caucus in 2 weeks.The truth though is they have no one to blame for Ron Paul's rise than themselves.

This past year we have seen how a GOP House of Representatives -who were mostly elected under a Tea Party banner- has caved time and again.Right now in Washington we are arguing with the Democrats on whether to extend the Bush tax cuts either 2 months or a whole year.We should be putting our foot down demanding that they be made permanent and then if the Democrats want to end them,let them raise taxes.

Ron Paul understands the peril this country is really in too.While the rest want to rearrange chairs on the deck of the Titanic,he understands we have to stop the leak -balancing the budget now,reducing the national debt now- if we are to survive.


“No one seems to have really grasped, except for Ron Paul, the gravity of our economic situation,”

All of this and more is producing Ron Paul's surge.Many conservatives are -like myself- dissatisfied with the GOP.Many of us just want a real choice between big government and smaller government.We want a party that stands for something,not a 'big tent' that stands for every thing and thereby stands for nothing.

That is the very appeal of Ron Paul,he actually stands for smaller government.He hasn't poll tested his belief's to see if they are popular or not.He believes what he says.You can't say that for the rest of the GOP.