Marines Told To Disarm Themselves In Leon Panetta Presence 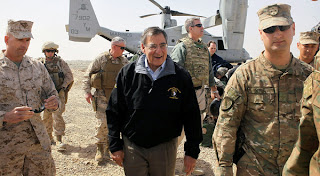 
In a sign of the nervousness surrounding the visit, Marines and other troops among the 200 people gathered in a tent at Camp Leatherneck to hear Mr. Panetta speak were abruptly asked by their commander to get up, place their weapons — M-16 and M-4 automatic rifles and 9-mm pistols — outside the tent and then return unarmed. The commander, Sgt. Maj. Brandon Hall, told reporters he was acting on orders from superiors.
“All I know is, I was told to get the weapons out,” he said. Asked why, he replied, “Somebody got itchy, that’s all I’ve got to say. Somebody got itchy; we just adjust.”
Normally, American forces in Afghanistan keep their weapons with them when the defense secretary visits and speaks to them. The Afghans in the tent were not armed to begin with, as is typical.