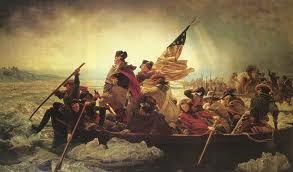 The American was voted the winner in a contest run by the National Army Museum to identify the country's most outstanding military opponent.
He was one of a shortlist of five leaders who topped a public poll and on Saturday was selected as the ultimate winner by an audience of around 70 guests at a special event at the museum, in Chelsea, west London.
In second place was Michael Collins, the Irish leader, ahead of Napoleon Bonaparte, Erwin Rommel and Mustafa Kemal Atatürk.

Now this is an honor that the Father of Our Country would be proud to hold.
Posted by Thomas Gann at 11:02 AM