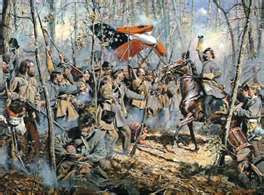 150 years ago today the Confederate Army of Mississippi,commanded by Gen. Albert S. Johnston attacked the Union Armies of the Tennessee and Ohio commanded respectively by Gen. U. S. Grant and Gen. Don Carlos Buell.

At first the Confederate forces surprised the Union armies,driving them from the field.Soon though the Confederate units lost cohesiveness and Confederate commanders lost command and control,resulting in the Confederate attack to be rendered piecemeal.This gave Union forces breathing room and their defence began to stiffen,most notably in what would be later called the 'Hornet Nest',allowing them to make an orderly withdrawal to a defencive line near Pittsburg Landing.

During the Battle for the 'Hornet Nest' while leading a attack in the 'Peach Orchard' Confederate commanding General Johnston was wounded in the left leg.Thinking his wound not be serious,Johnston ordered his surgeon to look after some captured Union prisoners.Soon afterwards Johnston bleed to death,which a simple tourniquet would saved his life.

The next day (April 7th) Grant with the newly arrived forces of Buell launched a counter-attack.The Confederate resistance was stiff but they were far to spent to maintain possession of the battlefield.

Shiloh changed things.It took away the notion of a short war and introduced both nations to the concept of a very bloody war.
Posted by Thomas Gann at 12:00 AM

Thank you,Brock.Shiloh was one hell of a battle.