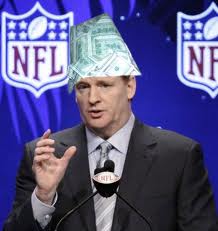 
's latest stadium snag has the NFL publicly questioning the state's interest in keeping the Vikings, and league Commissioner Roger Goodell is concerned enough that he is coming for another visit.
Goodell and Pittsburgh Steelers owner Art Rooney will meet with legislative leaders and Gov. Mark Dayton at the Minnesota Capitol on Friday to urge progress on the struggling effort to build a new home for the Vikings. By a 9-6 vote, a House committee struck down a $975 million stadium bill on Monday, dealing a major blow to the team's decade-long effort to get taxpayer help for a Metrodome replacement.

What the NFL and the Vikings are trying to do is to extort a new stadium from the state of Minnesota.If Minnesota doesn't comply,the Vikings are threatening to move.I would hope that Gov. Dayton would tell,Roger Goodell and Obama sycophant,Art Rooney,'don't let the door hit ya,where the Good Lord split ya,but we are not building you a new stadium.'
Posted by Thomas Gann at 12:36 PM