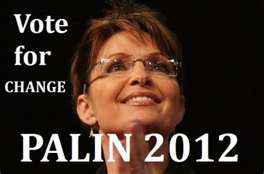 An excerpt from Sarah Palin's speech at Indianola,Iowa:

We sent a new class of leaders to D.C., but immediately the permanent political class tried to co-opt them – because the reality is we are governed by a permanent political class, until we change that. They talk endlessly about cutting government spending, and yet they keep spending more. They talk about massive unsustainable debt, and yet they keep incurring more. They spend, they print, they borrow, they spend more, and then they stick us with the bill. Then they pat their own backs, and they claim that they faced and “solved” the debt crisis that they got us in, but when we were humiliated in front of the world with our country’s first credit downgrade, they promptly went on vacation.


No, they don’t feel the same urgency that we do. But why should they? For them business is good; business is very good. Seven of the ten wealthiest counties are suburbs of Washington, D.C. Polls there actually – and usually I say polls, eh, they’re for strippers and cross country skiers – but polls in those parts show that some people there believe that the economy has actually improved. See, there may not be a recession in Georgetown, but there is in the rest of America.

Yeah, the permanent political class – they’re doing just fine. Ever notice how so many of them arrive in Washington, D.C. of modest means and then miraculously throughout the years they end up becoming very, very wealthy? Well, it’s because they derive power and their wealth from their access to our money – to taxpayer dollars. They use it to bail out their friends on Wall Street and their corporate cronies, and to reward campaign contributors, and to buy votes via earmarks. There is so much waste. And there is a name for this: It’s called corporate crony capitalism. This is not the capitalism of free men and free markets, of innovation and hard work and ethics, of sacrifice and of risk. No, this is the capitalism of connections and government bailouts and handouts, of waste and influence peddling and corporate welfare. This is the crony capitalism that destroyed Europe’s economies. It’s the collusion of big government and big business and big finance to the detriment of all the rest – to the little guys. It’s a slap in the face to our small business owners – the true entrepreneurs, the job creators accounting for 70% of the jobs in America, it’s you who own these small businesses, you’re the economic engine, but you don’t grease the wheels of government power.

So, do you want to know why the permanent political class doesn’t really want to cut any spending? Do you want to know why nothing ever really gets done? It’s because there’s nothing in it for them. They’ve got a lot of mouths to feed – a lot of corporate lobbyists and a lot of special interests that are counting on them to keep the good times and the money rolling along.

Read the whole speech or listen to it,its spot on.