Why I Fear Rick Perry 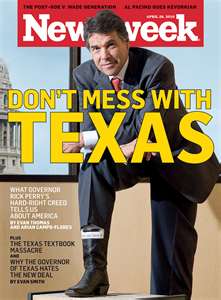 Conventional Wisdom holds that,Rick Perry,is a rube,a light-weight,who won't stand up well in the debates and will wilt and fade away as quickly as he came.Nothing can be farther from the truth.

If his past behavior is any indication, when Gov. Rick Perry debates his Republican rivals on September 7, he’ll treat them pretty ugly.

Although the Texan refused to debate his Democratic opponent in last year’s election, his earlier performances show he loves a good fight.

Not that he comes out swinging. Rather, he loosens up over time. And when he’s at his most relaxed, he goes in for the kill.

Read the full article to see examples how Perry hands his opponents their head.

Rick Perry is a smart pro,a shark,that knows when to go in for the kill.Romney wont last long as a viable candidate against him,maybe a month or 2, before the establishment crowd will jump ship and swim to Perry's shore.If Sarah Palin waits to November to jump in,she might as well as stay at home,it will be too late by then.Rick Perry is a force to be reckoned with.
Posted by Thomas Gann at 2:54 PM