Tony Bennett Has Left His Mind In San Francisco 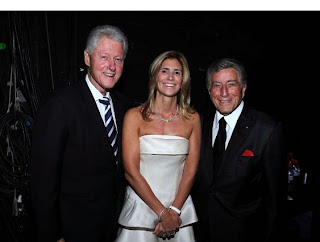 Tony Bennett,said this,in a interview on the Howard Stern Show:


“But who are the terrorists? Are we the terrorists or are they the terrorists? Two wrongs don’t make a right,” Bennett said.
In a soft-spoken voice, the singer disagreed with Stern’s premise that 9/11 terrorists’ actions led to U.S. military involvement in Iraq and Afghanistan.
“They flew the plane in, but we caused it,” Bennett responded. “Because we were bombing them and they told us to stop.”

Tony Bennett,you have broke my heart.You are a great singer,but you are a boob where Islamic terrorism is concerned.

Furthermore,it wasn't until after 9/11 that George W. Bush invaded Afghanistan and Iraq,or bombed anyone.If 9-11 was a response to our bombing,then it must be Bill Clinton fault not W's.

Thank you,Tony Bennett,for putting the blame for 9/11 were it belongs,at the feet of Bill Clinton!
Posted by Thomas Gann at 12:34 PM