Obama's Hometown Newspaper Urges Him Not To Seek Reelection! 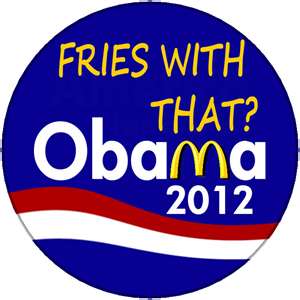 From the Chicago Tribune:


The vultures are starting to circle. Former White House spokesman Bill Burton said that unless Obama can rally the Democratic base, which is disillusioned with him, "it's going to be impossible for the president to win." Democratic consultant James Carville had one word of advice for Obama: "Panic."

But there is good news for the president. I checked the Constitution, and he is under no compulsion to run for re-election. He can scrap the campaign, bag the fundraising calls and never watch another Republican debate as long as he's willing to vacate the premises by Jan. 20, 2013.

That might be the sensible thing to do. It's hard for a president to win a second term when unemployment is painfully high. If the economy were in full rebound mode, Obama might win anyway. But it isn't, and it may fall into a second recession — in which case voters will decide his middle name is Hoover, not Hussein. Why not leave of his own volition instead of waiting to get the ax?


In the aftermath of the debacle in the NY-9 special election for the Dems,I would have given odds of 1/50 that Obama would step aside and let Hillary or someone else carry the torch in 2012.Still a long shot but in the range of probablity.

Now,that a major newspaper -no less than Obama's hometown newspaper,the Chicago Tribune- opens the question up of whether he should seek reelection or not,I would say those odds have narrowed to a 1/35 chance he may give up the chase.Still a long shot,but now its a open question to ponder.

It will be interesting to see if this has legs and others in the MSM begin to ask the question: "should Obama run,or not.