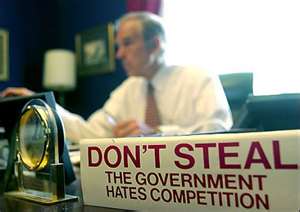 
......in Washington County, where Paul had expected to perform well, the caucus was postponed until Feb. 18 due to an expected snowstorm. Washington County Republican Chairman Chris Gardner told the AP he had no idea when the caucuses were postponed that his county would no longer count toward the grand total.

“This is an outrage," John Tate, Paul's campaign manager, said in an email to supporters. "But our campaign is in this race to win, and will stay in it to the very end."
Paul's campaign has accused the local GOP of postponing the caucuses to prevent the results from being reported on Saturday, arguing that "just the votes of Washington County would have been enough to put us over the top."
The campaign is also dismissing the notion that weather was a reasonable excuse for the caucuses to be put off.
“This is Maine we’re talking about," Tate said. "The Girl Scouts had an event today in Washington County that wasn’t cancelled!"
Paul's aides have maintained that the Texas congressman will wind up with the most delegates from Maine, despite Romney's apparent victory Saturday night. Maine's caucuses are non-binding, and delegates are selected at a state convention in May.
"We were a little bit disappointed last night," Paul said Sunday on CBS's Face the Nation. "But we were disappointed that the one county where we have done the best in the past, and we were expected to do the best, they canceled their caucus."
Paul spokesman Jesse Benton said the campaign was confident it would control the Maine delegation at the GOP nominating covention in August in Tampa, Fla.

Something is fishy in Maine and its not the daily catch.The GOP establishment is hell-bent on having Mitt Romney as their nominee,even to the point of voter suppression.

Thank you,Brock.I'm more than determined now to NEVER vote for Romney under any circumstance.

Write your name in first.