The Safe Haven Of Islam 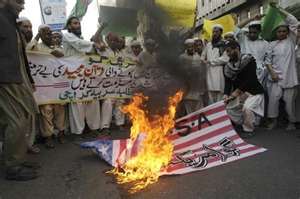 All hell has broken lose in Afghanistan over copies of the Quran being burned 'inadverdtly' by U.S. personnel.President Obama has tried to quell the outrage by offering an apology,saying he intended to hold 'accountable those responsible.'In return the Afghans held 2 U.S. servicemen 'accountable',murdering a colonel and a major.

But were the Korans burned 'inadverdtly' to begin with?It seems that the prisoners at the Parwan Detention Facility were 'exchanging hidden messages' using the Quran.

This is the M.O. for Islamic terrorist world wide.They use the Quran,mosques,and anything assiocated with their religion,to mask and cover their activity's.When their activity's are interfered with,they stand up with outrage in defence of Islam.

Barack Obama,and for that matter George W. Bush,have made a serious mistake by omitting Islam altogether from the war on terror.Instead,we should have drawn a distinction between radical Islam from Islam in general and taken on the radical elements in or out of Islam.

Whether here or Afghanistan,in their mosques or in the pages of th Quran,we have given our enemies a safe haven within our very midst,were they may launch an attack against us.
Posted by Thomas Gann at 1:47 PM