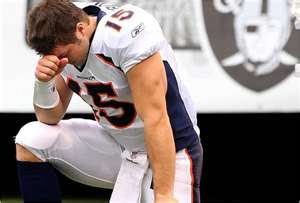 Tim Tebow is more than just an athlete.he is an asset and he is seeking to profit from his fame,as he should.The kicker though,is its not just Tim Tebow that seeks to profit from his fame,but corporate America wants in on the action as well.As they invest into Tebow they will seek assurances from him to be less 'offensive.'They will seek to water down his Christianity and soften his moral stances,so he can appeal to more people and help their bottom line.

I sincerely hope Tim Tebow proves me wrong and resists the pressure that will be heaped upon him to change and be like Justin Bieber.But I know,with the amount of money that's going to come his way,the temptation to conform will be almost impossible to resist.
Posted by Thomas Gann at 11:19 PM