Rick Santorum And The Liberal Inquisition 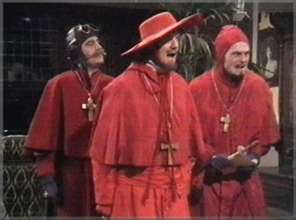 The Lefts attack on Santorum:

Santorum has also been attacked by Steve Kornacki at Salon for his “Catholic-infused opposition to abortion.” It may come as a shock to Kornacki that the late Christopher Hitchens was also pro-life, and that Nat Hentoff is proudly pro-life today. Their atheism hardly accounts for their understanding of Biology 101.
The blogsite Huffpost Hill says, “Santorum thinks the Catholic Church isn’t conservative enough, which is kind of like thinking Megadeth doesn’t thrash hard enough.” Guess that means Santorum is a very Catholic kind of guy (Megadeth is a heavy metal band—I had to look it up). Should Santorum therefore be disqualified? Irin Carmon at Salon no doubt thinks so: “Rick Santorum is coming for your contraception.” Probably around midnight.
Linda Hirshman, also at Salon, is having a stroke: “That an advocate of legislating strict Roman Catholic sexual doctrine came within eight votes of winning…warrants attention.” Yeah, if this Catholic makes it to the White House, he’ll seek stimulus money for mandatory chastity belts.
Let’s face it, the left want a religious test for president—they want to exclude all religious candidates. Which explains their love affair with Obama.

If its OK to question Santorum's Catholicism,can we now question Romney's Mormonism?

Disclaimer: I am neither a Romney supporter or a Santorum supporter.Nor am I,or ever will be,a Catholic or a Mormon.
Posted by Thomas Gann at 1:13 PM