A Few Thoughts On The New Hampshire Primary 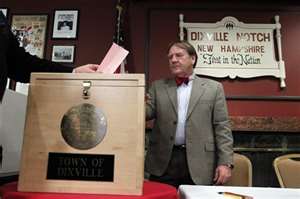 1.) Mitt Romney,like last week in Iowa,failed to get a majority.So,he retains his first place seat at the loser's table.BTW,all New Hampshire decided was were a handful of delegates go,that's all.

2.) Jon Huntsman has spent a better part of 6 months in New Hampshire and can only garner 18% of the vote.Dude,you are done,drop out and get your daughters a reality TV show.

3.) Is conservative media virtually irrelevant this election cycle?Last night Mitt Romney and Ron Paul together got over 60% of the vote.Most of the big guns in conservative radio,TV,and on the web oppose both of them.Have conservatives tuned out the talking heads?
Posted by Thomas Gann at 12:50 PM